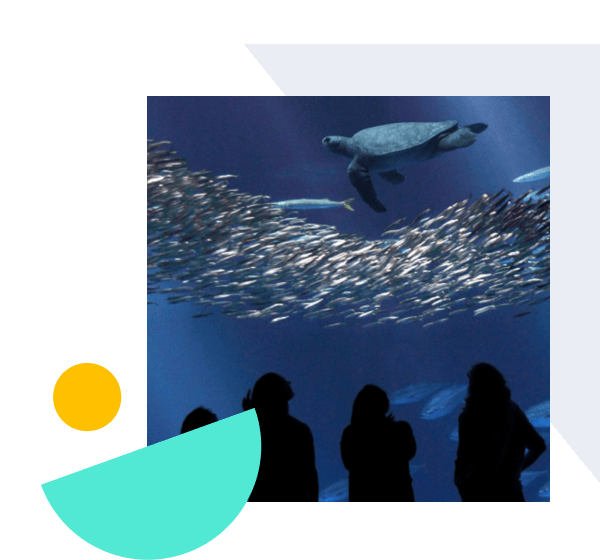 Headquarters
Monterey, CA, USA
Industry
Media & Entertainment
# of Employees
554
# of Users
300
Departments Using Wrike
Company-wide
Why Wrike
The team knew a collaboration tool was necessary to help them organize and delegate jobs but were struggling to find one that was complex enough to handle all their unique projects

Monterey Bay Aquarium devoted to inspiring conservation of the ocean.

Today, ocean conservation is a growing topic of concern around the world. The ocean creates 50% of the oxygen we breathe, so protecting the health of the ocean is vital to the health of all life on earth. At the Monterey Bay Aquarium, education is a key part of ocean conservation. The organization strives to not only raise awareness but educate and inspire the next generation of ocean stewards. They've developed three integral education programs that bring in about 110,000 students, teachers, and adult chaperones annually: school programs, which support field trips to the aquarium; teen programs like summer camps and volunteer opportunities; and teacher programs, where the staff work with teachers to incorporate science and ocean conservation education into their curriculum. "I think education is crucial for the future of anything," says Katy Scott, Digital Learning Manager. "But if we want our oceans to be protected, we really need to think about the next generation of stewards who are going to protect the ocean." Scott is responsible for integrating technology into all the education programs the aquarium offers.

Currently, the aquarium is in the process of doubling those programs and building a brand new education center to meet increasing demand. "We get twice the number of applicants we can accept," says Scott. "So right now, we're trying to double those so that anyone who wishes to join a program, can. But trying to adjust to that process requires lots of collaboration and communication."

While the programs are doubling in size, the staff is working extra hard to get things done. They juggle several tasks while working on different teams and different programs — so communication is key in everything they do. "Our education programs are some of the best in the country, and our team was doing it with Excel spreadsheets," says Scott. "But when we realized that we're growing and that balls were getting dropped, it was never due to incompetence, it always came down to communication."

"It was hard to stay on track," says Soo Dean, Director of Annual Giving. "We spent a lot of time updating and tracking the flow of the projects on the Excel spreadsheets. For instance, when dates get pushed, our staff is spending hours trying to update the spreadsheet with the rest of the dates for six months of production schedule. It was exhausting." The team knew a collaboration tool was necessary to help them organize and delegate jobs, but were struggling to find one that was complex enough to handle all their unique projects. "We tried different project management software but most of them are made for tech companies," says Scott. "We don't create products; we create curriculums, build programs, and plan events. And it's not the same process you would use if you're creating a website or selling a product."

"As managers, Wrike allows us to better support the people who work with us. It also allows us to ensure that, if I'm leading a program, I know that everyone clearly understands what they're supposed to do."
Katy Scott, Digital Learning Manager

By enhancing collaboration, the Monterey Bay Aquarium is now able to grow their education programs more efficiently, so students and teachers can learn how to protect our ocean.

As programs grew and communication became more difficult, the team at the Monterey Bay Aquarium found the right collaboration tool that allows them to communicate easily and abandon their Excel spreadsheet madness. They were able to keep using the processes that worked while tightening up the ones that caused confusion and delays. Instead of going back and forth in meetings about unclear expectations, they can document priorities and expectations in Wrike from the start of every project, and team members can easily refer back if needed. "Basically what our meetings involve is reporting our data and what we've discovered, then going out and doing a lot of our own work, then coming back with more research," says Scott. "The clarity of knowing what the expectation is and then coming back is integral in terms of moving forward at a steady pace."

Wrike has also allowed the team to take their focus off of tedious, administrative tasks that take up so much time and devote more time to running their initiatives. Instead of manually editing dates in Excel spreadsheets when plans change, it's all automatically updated in Wrike. "When we create a dependency for each task within Wrike, we can change its deadline, and it automatically reschedules everything else that's dependent on that task. That's been a huge help," says Dean.

When staff members leave or go on vacation, time is no longer wasted on playing catch-up or looking for missing tasks. All tasks are archived in Wrike so they can easily see what everyone has on their plate at all times. "We had someone leave who had been using Wrike, so we were able to just go into their task list and reassign everything that was assigned to her and it was done," says Scott. "What used to take 4 hours, now takes 30 seconds." The ability to see where others are overloaded or struggling to complete their tasks has allowed the entire team to become more efficient and more collaborative. With the programs doubling in size and the number of projects growing, adopting a tool to provide visibility and easy access to all ongoing projects gives team members the opportunity to jump in and help each other out. "Everybody in our department is a perfectionist," says Scott. "So having the ability to say 'Hey, I see you've got a lot on your plate. I have some time, so let me help you,' has helped not only reduce stress but helps us do our jobs better."