Who Works More? The Secrets of Male and Female Working Habits [Infographic]

It's late at night. The office building has long gone dark and quiet, yet the lights are on in one of the windows. Two figures are arguing over something in front of a computer screen. No, it’s not a secret lab. These guys just need to finish that very important and urgent “thing” for tomorrow. According to our recent survey with almost 2,000 respondents, 88% of men and 85% of women regularly overwork. But who feels more stressed about this matter? What are the other remarkable differences between men’s and women’s work styles?

The “anti-stress champion” title goes to men. While 45% of them overwork more than 5 hours a week, that doesn’t seem to damage their work-life balance. The figures in this chart speak for themselves:

The headache grows with power

Juggling work and personal life is never an easy task.  According to our survey, the more responsibility you have, the harder it gets. Only 14% of female business owners say they are satisfied with their work-life balance. Want it done well, do it yourself. Huh?

Delegation is known as one of those mission-critical, yet rather challenging, management skills. We discovered that 18.4% of women and only 12.8% of men still prefer to do everything by themselves — even when they have the authority to delegate. Diamonds are a… man’s best friend?

We all wouldn’t mind some motivation to get things done. If you haven’t seen our previous infographic yet, we’ll remind you that a sense of responsibility, a good mood, and a possible reward were cited as the leading productivity triggers. Interestingly enough, it appears that a prospective reward inspires 45.8% of men and only 35.6% of women. 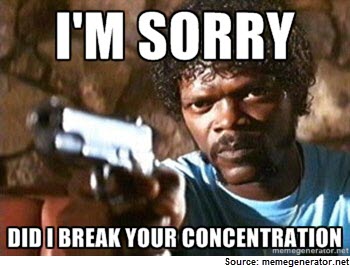 The biggest productivity killer is interrup--

After a good lunch, the tricky task that bothered you all morning seems to crack at last. And that’s when your colleague calls an impromptu brainstorm for his puppy-clothes campaign. BAM! The concentration is gone, and so is the flow. We all know the feeling. That’s why men and women for once agree when they name the biggest productivity threat. The Razzie goes to… interruptions. That’s an impressive win over procrastination, a strong opponent.

For a more extensive overview of men’s and women’s work styles, check out our brand new infographic. Overwork doesn’t seem so dreadful with these bright colors. ;-) Ah, procrastination. We know we’ll regret giving in to its siren call, and yet it’s so... Confession time: in the course of writing this article, I’ve checked Facebook, Slack,... Whether you need a motivation boost, help prioritizing, or some clever time-saving...